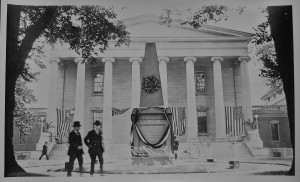 On June 1, 1801, Sir Robert Richard Randall signed his will.  In addition to the bequest for Sailors’ Snug Harbor, his will also contained many smaller, yet equally generous bequests.  He left his gold sleeve buttons and an annuity to his housekeeper Betsy Hart.  To his overseer, Adam Shields, he gave his gold watch and forty pounds.  It was also documented that one of his servants was to receive his shoe and knee buckles.   The photograph above was taken during the early 20th century during an unknown occasion.  Historians surmise that the Randall Memorial or obelisk was decorated to celebrate an anniversary. 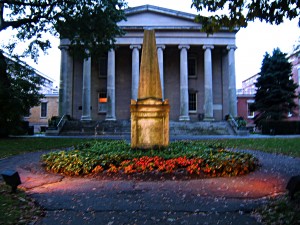