The CityParks PuppetMobile’s original production, Tales of Brier Rabbit, follows the adventures of notorious trickster Brier Rabbit, who is once again up to no good. Deceiving and stealing from his fellow animal friends, Brier Rabbit thinks he’s much too clever to ever get caught. However, in this modern adaptation of the American folk tale, Brier Rabbit’s pals are on to his tricks, and set out to teach him a lesson he won’t soon forget! 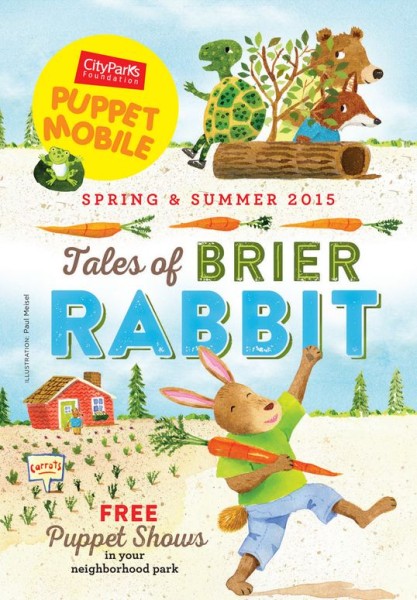 CityParks PuppetMobile, one of the only traveling puppet theaters in the country, brings Swedish Cottage Marionette Theatre productions and puppet making workshops to all corners of the city, free of charge. Traveling the five boroughs in a PuppetMobile equipped with a stage and staff of professional puppeteers, the CityParks PuppetMobile brings entertainment to 50,000 children and families each year. Performances are held in parks, playgrounds and recreation centers from April to October.