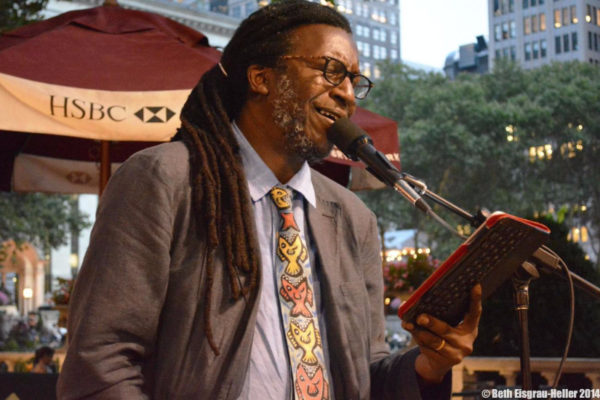 Partnering with some of the brightest stars of New York’s experimental and indie music scenes, Cornelius Eady & Rough Magic have created a deeply moving musical experience that is modern, rhythmic, and deeply rooted in our history. It speaks as clearly to today’s #BlackLivesMatter movement as to the Civil Rights movement of Brown’s era.

CORNELIUS EADY AND ROUGH MAGIC is a collaboration of writers and musicians whose focus is the nexus of the written word and music. Founded in 2012, the band has since released an EP, 7 Songs, and several poetry/music chapbooks. The band consists of Charlie Rauh (Stargroves; Grave Jinglers) on guitar, Emma Alabaster (Tamar-kali; Go: Organic Orchestra) on bass, Lisa Liu (Magnetic Island, Mixed Doubles) on guitar and keyboard, and Leo Ferguson (Michael Daves; Stacey Dillard) on drums. We are joined by fiction writer and poet Robin Messing (Serpent in the Garden of Dreams; Holding Not Having) on vocals.