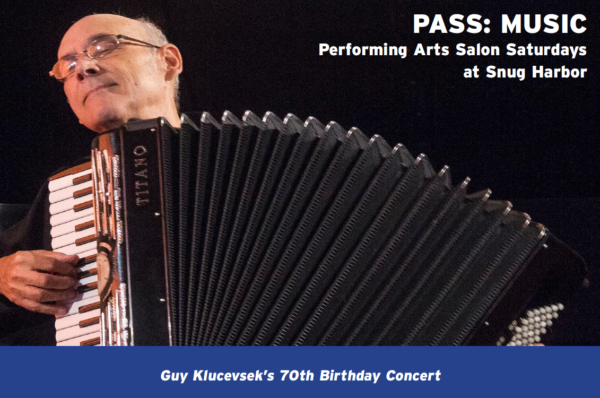 Newhouse Center for Contemporary Art (Building C + G) | $10
5PM Reception with 6PM performance followed by artist talk
Tickets can be purchased in advance or at the door. Click here to order tickets in advance.
Music of Guy Klucevsek, with Klucevsek on accordion, joined by Todd Reynolds, violin, and Kamala Sankaram, voice and accordion.

Guy Klucevsek, one of the world’s most versatile and highly-respected composer/accordionists, creates music which reverberates with sounds of the ballroom, the beer garden and the concert hall, fusing elements of regional accordion styles with jazz and avant-garde music. Since 1972, he has been composing music extensively for modern dance, theatre, puppet and object theatre, and film, as well as for solo accordion, small bands, and chamber ensembles.

He can also be heard on John Williams’s orchestral scores for the Steven Spielberg films, “The Terminal,” “Munich,” “Indiana Jones and the Kingdom of the Crystal Skull,” and “The Adventures of Tin-Tin,” and on A. R. Rahman’s score for “People Like Us.”

Come celebrate with him and the rest of the performers for his birthday celebration!

The Composers Now Festival celebrates living composers, the diversity of their voices and the significance of their musical contributions to our society. During the month of February, the Festival brings together dozens of performances presented by venues, ensembles, orchestras, opera companies, dance companies and many other innovative events throughout New York City. Experience the sounds and get to know the creators behind the music. From jazz to indie, from classical to electronic and beyond, join us on a sonic journey through the landscape of the arts of our time. Composers will be in attendance at all events and will be interacting with audiences. Composers Now is a project partner of The Fund for the City of New York. We gratefully acknowledge the support of the ASCAP Foundation, the BMI Foundation, the Cheswatyr Foundation and the Ann and Gordon Getty Foundation.