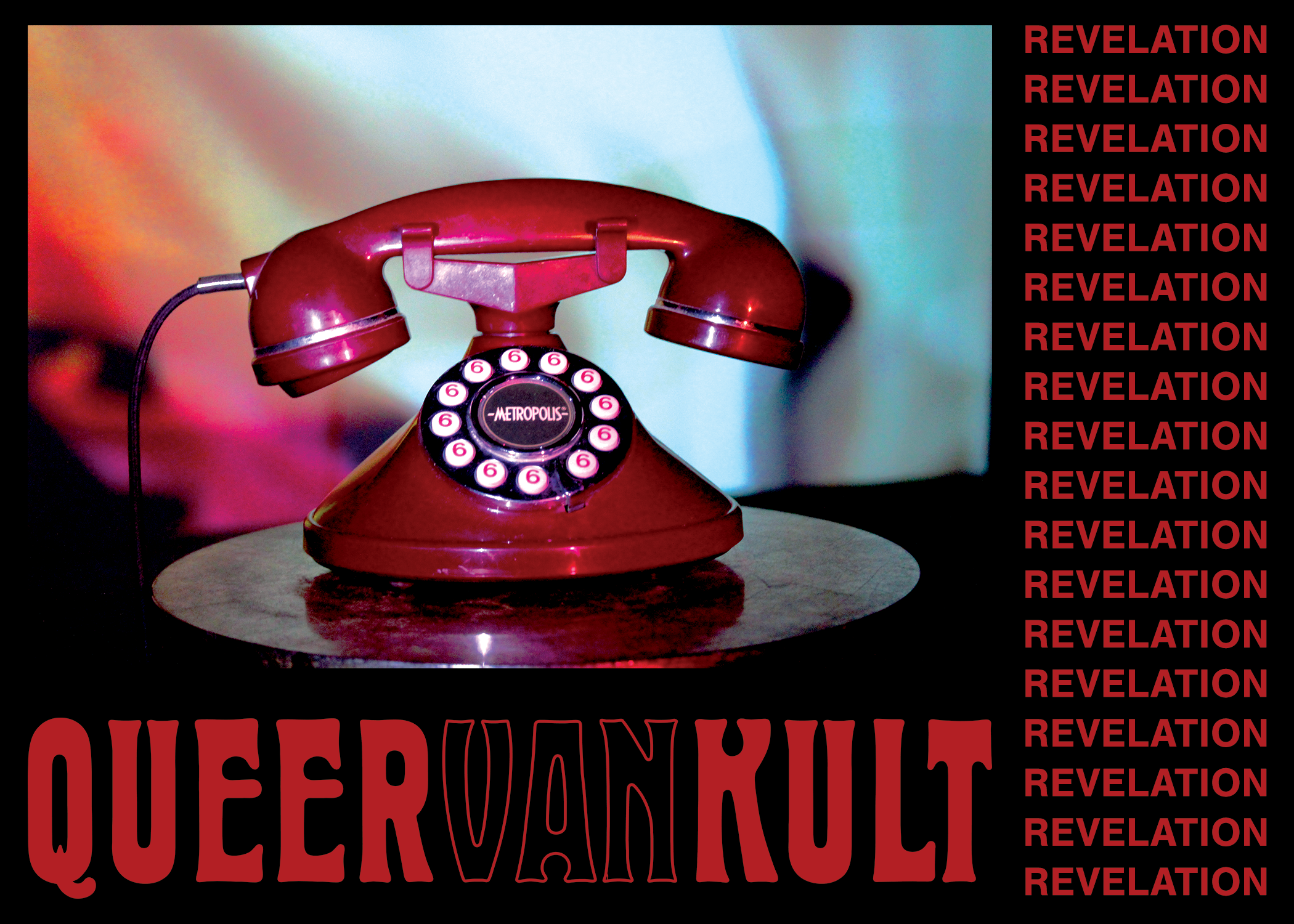 Queer Van Kult: Revelation transforms the Main Hall into a fully immersive dreamscape that subverts the societal narrative in which to be queer is to be “othered.” Growing up queer is to be subjected to religious dogma and often personal and familial rejection. Just by existing, a queer person instigates circumstances without their willing participation—scenarios fueled by patriarchal expectations and aspirations of a nuclear family. Upon entrance, Revelation invites visitors to be “unborn” from these societal expectations and enter a world where queerness is a preexisting condition.

Revelation is inspired by hell houses, nuclear families, dream logic, and creationism churches. Some of the topics explored are the sacred and the profane, passing as cisgender, and body dysmorphia. QVK both curated and commissioned works from visual and new media artists local to Staten Island, and NYC.

Queer Van Kult is a liturgy of performance, installation, and music with a focus on queer artistry and multimedia work. Imagined as a surreal funhouse of queer taste, Queer Van Kult was created as a response to a tapering of dedicated platforms for avant-garde performance and art on Staten Island.

The events presented and produced by the collective intend to encourage an atmosphere of community, unbounded creativity, and celebration—all while providing a home for the cultivation of experimental works by local and emerging artists beyond. Currently, QVK is Rachel Lyngholm, Nicie Mok, Jenno Snyder, and Zoë Tirado.

QVK Producer Bios
Rachel Fox (she/her) is a graphic designer, communications strategist, and video editor from Staten Island, NY. Currently, she designs for both the Brooklyn-based experimental arts space, Roulette Intermedium, and the Staten Island-based art and literary press, NYSAI. As an artist, her audiovisual compositions draw work from internet archives, collaging found footage from the 1950s onward with her music or foley experiments. Her videos often attempt to exploit the horror in vintage Americana’s view of women and people who identify as femme. Rachel is also a co-producer of the experimental art presenter collective, Queer Van Kult. She has a BA in Interactive Multimedia from The College of New Jersey. www.rachellyngholm.com

Nicie Mok (she/her) is a brand consultant, multidisciplinary artist and co-producer of Queer Van Kult. Although often absurd in application, her work largely deals with issues of trauma, conformity, and soul elasticity. She has three black cats and a BA in Financial Economics from Columbia University. www.niciemok.com

Jenno Snyder (they/them, she/her) is a Staten Island-based queer experimental composer, multi-instrumentalist, and intermedia artist. Their latest project is a playable keyboard sculpture made from strap-ons called “The Organ Grindr.” They wrote and produced two experimental pop albums, Cherry Gross (Meat Balloon Archives, 2020) and Too North (Worry Records, 2018). Formerly under the name God II, they released three works: Crazz (2017), Infinite Feedback Lute (Lost Notes Media, 2017), and Death After Life (Captain Crook Records, 2016). Currently, they’re in a noise duo, Sludgemisers, with percussionist Nick Guttilla. They are founder and editor of the Staten Island based literary press, NYSAI Press, and co-producer of Queer Van Kult: an experimental performance, installation, and music event showcasing queer artistry in Staten Island, NY. Their photography and woodcuts have been featured in galleries across Staten Island. They hold a BA in Physics and Philosophy from New York University. www.jennosnyder.com

Zoë Tirado (she/her) is a complex female character born and raised in Staten Island, NY. Zoë creates work that explores identity, sexuality, and the grotesque. Referring to classical portraiture as a vehicle for her sometimes obscure subject matter, Zoë walks the line between what is considered traditional and what is obscene. She has participated in group exhibitions such as Dawn of a New Decade at Staten Island Art’s Artspace, Damaged Art, curated by Cheryl Georgette, at 98 Orchard St, and virtually in Touch with Moisturizer Gallery. Her solo exhibitions include Buff Chixxx at Hub 17 in 2019 and Ghoulfriends on view at the Newhouse Center for Contemporary Art in spring 2021. She released the zine Dynasty Forever with NYSAI Press. Zoë is a co-producer of Queer Van Kult and the mother of Honey-Yucky. She has a BFA in Fine Arts from the School of Visual Arts and a MA in Museology from the CUNY School of Professional Studies. www.zoetirado.com