Staten Island, NY – Snug Harbor Cultural Center & Botanical Garden is excited to launch the 2018 Summer Concert Series, presented by the Richmond County Savings Foundation.  All concerts are free to the public and will take place from 7:00 PM – 9:00 PM on the South Meadow Lawn of Snug Harbor Cultural Center & Botanical Garden at 1000 Richmond Terrace in Staten Island. 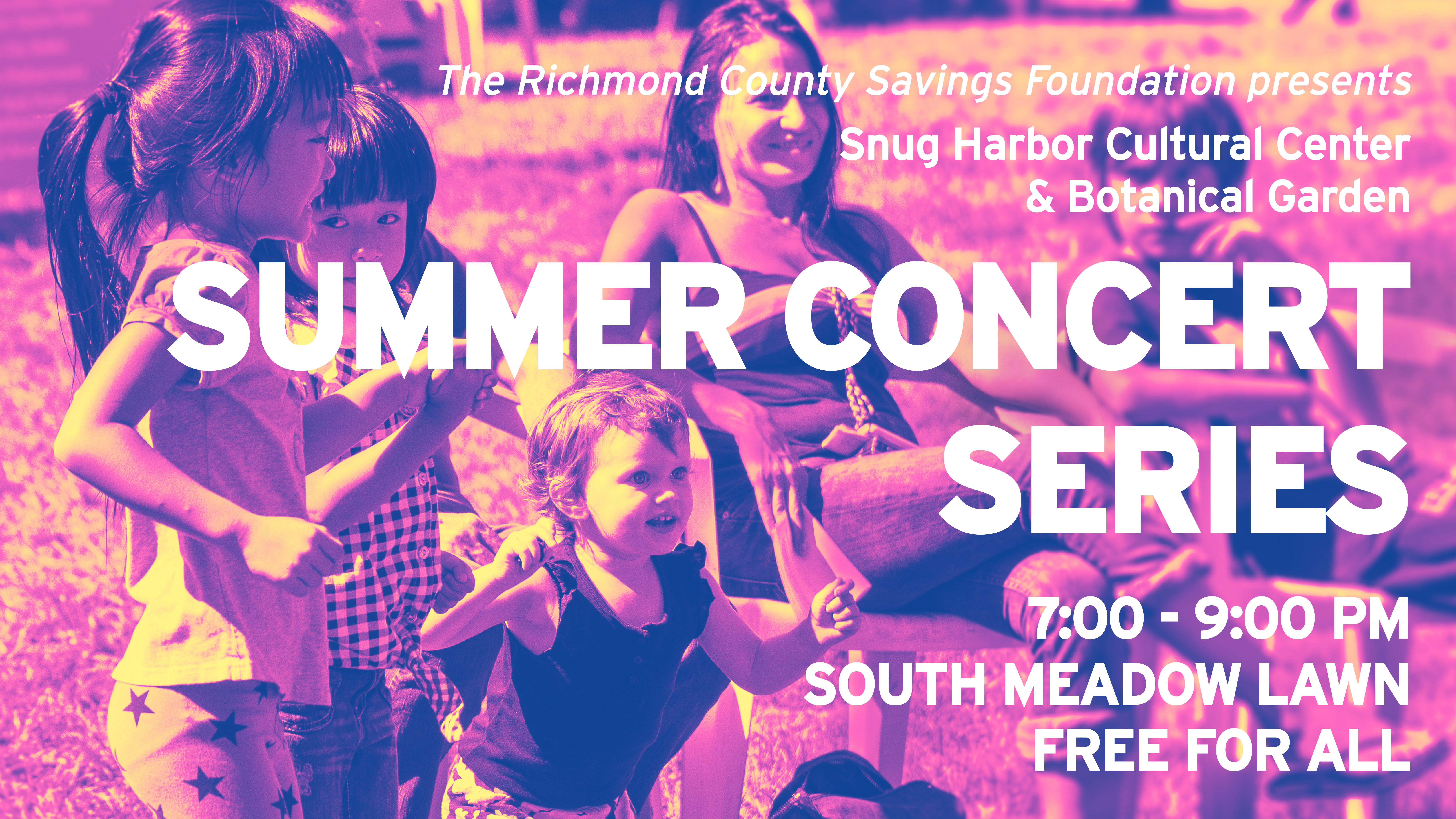 The musical lineup is as follows:

“We’re thrilled to bring the community together for four Saturdays full of free music and good times at Snug Harbor,” said Aileen Fuchs, President and CEO of Snug Harbor.  “Many thanks to the Richmond County Savings Foundation for helping us bring seven exciting local musical acts to our stage.  We’re looking forward to celebrating with local music and local food and drink at a favorite local spot.”

“For the first time in over ten years, we are proud to bring a summer concert series back to Snug Harbor’s South Meadow Stage,” said Larry Anderson, Snug Harbor’s Director of Performing Arts and Production Management.  “The series features music for all tastes and ages. We hope people will make a night of it and bring a picnic, invite their friends and family, and enjoy the music.”

Younger guests will enjoy lawn games, while our adult patrons can visit the beer and wine tasting for $5 courtesy of Honor Wines and Flagship Brewery.  Food will be sold by Cheech a Cini’s Truckin’ Trattoria.  For their comfort, attendees are asked to bring beach chairs or blankets to sit on, though a limited number of chairs will be provided. 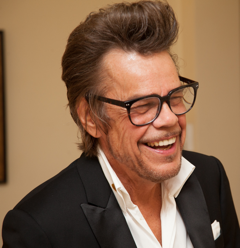 Buster Poindexter (nee David Johansen) first attracted attention as a glam rock pioneer (in the New York Dolls, with whom he still tours) and then as an early MTV idol (with “Hot Hot Hot”).

Yet with his big, deep, resonant voice, Buster Poindexter is most impressive as a crooner and occasional belter of ballads in the classic R&B tradition. His ongoing run affirms the point that however you know him, the artist known as Buster Poindexter, complete with his one-liners and longer comic monologues (not to mention his signature pompadour), is one of the most endearing and enduring entertainers currently trodding the boards in New York.

Opening act Maker Park Radio is a community internet radio broadcasting out of the Staten Island Makerspace. MakerParkRadio.nyc is dedicated to providing free music and live arts programming by broadcasting selected two hour shows that are diverse and inclusive of many genres and sub-genres.  On July 28, Maker Park Radio will be broadcasting a set of Buster Poindexter’s classic songs in anticipation of his exciting performance. 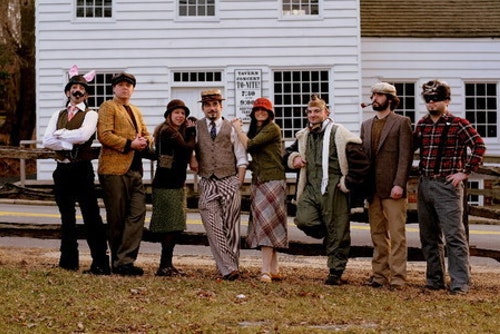 Weathervane is Paul Kraft, Rin Royer, Alexander Griggs, and Cain Kline, with rotating special guests. Born on the Mason Dixon Line, Weathervane combines music from the mountains with energetic jams and heady harmonies to make their own sound that they call Psychedelamericana. 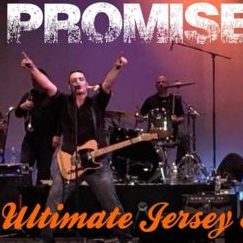 The core members of Promised Land have been playing music together since they were just 15 years old. The first time they played at the Jersey Shore was in the summer of 1990 at the world-famous Stone Pony where they opened for E Street band member, Nils Lofgren.  Ever since that show, the Jersey Shore was permanently injected into their blood and they have been a fixture on the Jersey Shore music scene ever since, with the idea to bring the music they loved growing up to others with the same energy and flare that the Jersey Shore bands delivered for them. The band consists of Toni Nostro on piano, Tommy Dowd on bass, Alex Mahoney on saxophone, Tommy LaRocca on baritone sax, Brian Miesegaes on trumpet, Mike Petillo on guitar, Rob Petillo on drums, and Kenny English on lead vocals and rhythm guitar.

The American Beauty Band pays tribute to the Grateful Dead and the Jerry Garcia Band. They are inspired fans of the music whose lives have been intertwined with theirs for such a long, long time.  Born of the idea that Jerry and the Dead’s musical legacy lives on through us, they hope to move you to their rhythms and beats with a passionate outpouring of uplifting and classic favorite melodies that are sure to keep you coming ‘round for more.  Band members are Fred Scholl on guitar and vocals, Jamie Lilling on drums and percussion, Larry Brent on guitar and vocals, Katie Giordano on vocals and percussion, Tom Cellamare on bass and vocals, and Rich Brotman on piano and vocals. 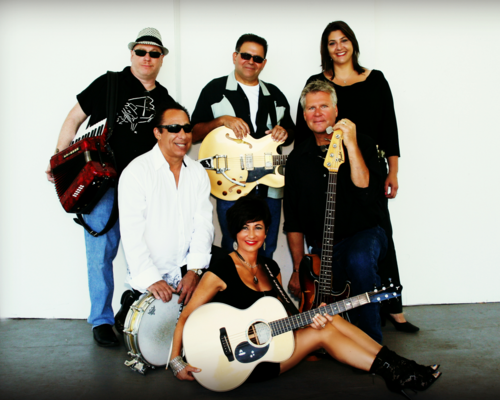 Joan Caddell & The Midnight Choir straddles the lines between several genres of music — unsurprising given that their front woman is equally comfortable tapping into both her right and left brain. Attorney by day, rock goddess by night, Joan knows a thing or two about breaking borders and bridging boundaries. Her band embodies a unique style best described as Americana pop rock with a little country on the side.

The original tunes and cover songs of Joan Caddell & The Midnight Choir range far and wide, but a common thread binds them all — a heartfelt invitation and a rousing call come together to make each performance a communal experience. The band’s infectious energy and passionate playing style move audiences from the inside out, making honorary band members out of everyone by a show’s end.

Singer/guitarist Karlus Trapp may be the most versatile musical dynamo on the circuit and is a crowd pleasing good vibes favorite to people of all ages. For a beachy, good vibes summer sound, or a Mardi Gras flavored party vibe, no one does it better. With a musical sensitivity that is a sixth sense, and his ability to rock reggae, the blues/jazz, 60’s/ 70’s, or play quiet acoustic background music, Karlus is in demand at private parties, happy hours, and weddings from the Jersey shore to the Bahamas. Awesome as a solo, Karlus also plays as duo or trio, or with his band MaGumbo