***The Newhouse Center for Contemporary Art will be closed until further notice.  Learn more here. We apologize for the inconvenience.***

The Newhouse Center’s galleries display exciting, experimental art from across the world.  General admission is $5.00, $4 students/seniors, and free for Snug Harbor Members and students grades 6-12 with student ID.

Located in Buildings C and G, the Newhouse Center for Contemporary Art includes Snug Harbor’s Visitor Center and is the centerpiece of the five majestic Greek-Revival buildings on our front lawn. 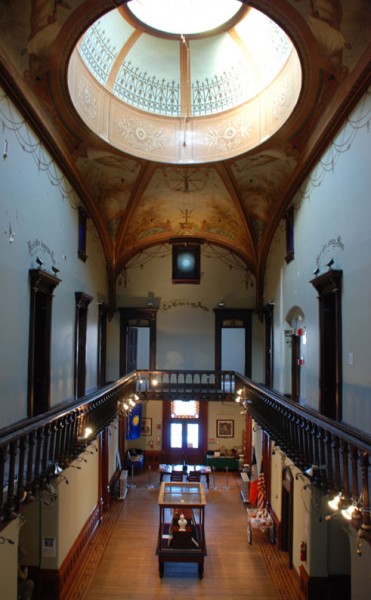 Building C was designed by Minard Lefevre (1798-1854) and completed in 1833. It originally served as an administration building and included dormitories for thirty seven sailors on the second level.

Nautical influences are found throughout the interior’s stained glass and woodwork. Louis Comfort Tiffany was umored to have been commissioned in the 1880s by Governor Thomas Melville to create unique stained glass transoms that featured ships and lighthouses.

The large transom above the entrance door honors founder Robert Richard Randall, whose benevolence created a home for “aged, decrepit and worn-out sailors.”

The clerestory windows at opposite ends of the hall depict the sun and the moon. There is a special attic room behind the sun window that is lined with reflective metal and a mirror which directs light into the rotunda. The sunburst rays in this window track the ellipse of the sun over the Visitor Center becoming brighter from right to left.

Blue-glass etchings in the upper clerestory depict various constellations, such as Ursa Major (the Big Dipper), that would have been familiar to sailors who used them to navigate on the seas. The ceiling mural, towering sky-lit dome and weathervane were restored in 1994.

Neptune’s image punctuates the north and south ends of the ceiling. Ropes, anchors and parrots also appear throughout the ceiling mural.  A nautical compass in the hardwood floor honors the legacy of the sailors and a Greek key motif around the perimeter was common element in Neoclassical interiors.

The Newhouse Center for Contemporary Art is thankful for support from The NYC Department of Cultural Affairs, the Samuel I. Newhouse Foundation, New York State Council on the Arts, the Smithsonian Institutions Affiliations Program, and Materials for the Arts.